Taking Care of a Pirate Ship

We like to think of a pirate crew as being jolly fellows, out for a good time, drinking rum to excess and then sleeping it off with abandon. But the Golden Age of Piracy was an age of wooden ships, and wooden ships need taking care of, especially in a tropical climate.

If you ever read Captain Johnson’s The General History of the Robberies and Murders of the Most Notorious Pyrates (published in 1724 and still available today) you will notice that, about every six weeks to three months, the pirates “stopped to clean.”

So what, exactly, were they cleaning?

It was the bottom of the ship, the proper name for the task was “careening,” and doing so took quite a lot of work. First, a safe harbor had to be found, far from the prying eyes of the authorities, because the pirates would be effectively helpless for the duration. Fortunately the Caribbean offers many uninhabited islands, and anyplace off the regular ship lanes would do. A spot with fresh water, fruit trees, and wild game was ideal.

Next the vessel had to be lightened. This was done by putting everything in it, piece by piece, into the longboat, and rowing it to shore. There it was unloaded, so the boat could go back for more. Soon the island’s shore would be stacked with crates and barrels. This was where it was handy to have water nearby, because the pirate ship’s water supply, usually several tons in weight, could simply be emptied into the ocean. 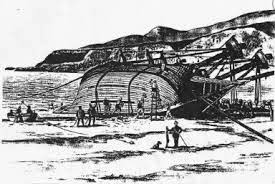 Then long, heavy ropes were run from the ship to the land, and the pirates went to work. Using nothing more than the strength of human bodies, they dragged their entire ship onto dry land.

Of course, this was very difficult, but they had a few tricks to aid them. For one thing, a beach with a long, gentle slope would have been selected. For another, the work would be done at high tide, with the ocean helping. Then, as the water retreated at low tide, more of the boat would be out of the water.

Why go to all this effort to clean the bottom of a ship, where no one would ever see? They weren’t just cleaning off dirt. The pirates were removing barnacles, seaweed and other marine growths. It was very important to keep the bottom of the boat as smooth as possible. An uncleaned hull could be dragging tons of shells, and hundreds of yards of trailing weed. Such things could cut a ship’s speed in half. Pirates depended on speed, both to catch their prey and to escape from Navy ships. 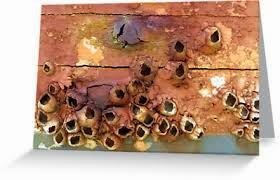 Merchants knew this too. But for them, taking the time to clean a ship meant time taken from running cargo. It cut into profits. Furthermore, merchant sailors counted on having time off when the ship was docked. Cleaning the bottom of a ship was hard, dirty, work, and they wanted extra pay for doing it. Pirates were cleaning for their own lives, and didn’t mind nearly so much. 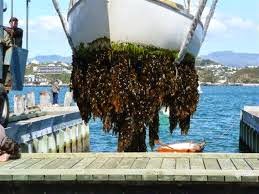 Another thing that drove the pirates to clean so carefully was a creature called teredo navalis, or the common shipworm. It was not actually a worm at all, but a saltwater clam. But its home was on floating wood, and in the age of wooden ships it was a plague like no other.

Shipworms dug into the hulls of ships and turned them into honeycombs, so riddled with holes that they could be torn apart by a man’s hands. A ship riddled with these creatures was a floating coffin, constantly leaking, delicate enough to break apart at the slightest stress from wind or water. 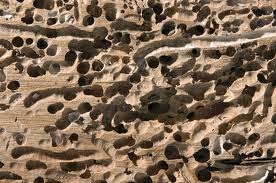 Merchant sailors, and the navy, tried everything to keep shipworm at bay. In 1710, the best they could come up with was a coat of white lead paint next to the wood, and a coat of tar over the white paint. Pirates often couldn’t get these things, so they careened regularly.

Of course, being pirates, they did their best to keep the work as easy as possible. On at least one occasion, pirate captain Sam Bellamy took advantage of the crew of a merchant ship he had captured by forcing them to clean his pirate ship. The merchant sailors took two weeks to finish the job, which is probably why the practice didn’t spread.

But on many occasions, the pirates turned this chore into an excuse to party. The incentive to get the ship back in the water was high. But some crews made themselves feel more secure by building an on-shore barricade from sand or barrels, and arming it with the ship’s cannons (which, being heavy, had to come on shore anyway.) Some descriptions of this make it sound like boys building a fort, with much more elaborate fortifications than were actually called for. Given the cooperative nature of pirates, I can easily imagine some competition between groups to see who could make the coolest wall. 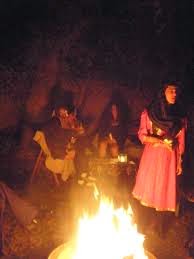 But a more universal practice was the after-careening party. With the ship back in the water, work turned to gathering fresh provisions… shooting birds, hunting for wild pigs or goats, picking fruit and peppers. In the meantime, the ship’s cook would be setting up for roasting, stewing, pickling, frying and baking. The liquor was already on shore. Sometimes the party lasted for days.

In fact, one pirate party, along a particularly popular stretch of beach in the Carolinas, is said to have gone on for months. As one pirate crew ran out of booze, or stamina, the next crew would show up, with barrels full. At some point, prostitutes began to arrive. It became the longest running celebration in history.

Except that, afterwards, the ships probably needed to be cleaned again.