It’s been mentioned before, that the word ‘buccaneer” is closely related to the word “bacon” and that the term defined Englishmen who lived along the Spanish coast of the Americas, where they made their living by cutting a species of tree known as “logwood”, killing and smoking the meat from local pigs, and occasionally paddling out the attack Spanish boats that seemed vulnerable.

These were casual pirates. Their main interest was the illegally harvested wood. Logwood is a small tree which grows in clumps close to the seashore. Technically, the tree is a legume. It produces a single, edible bead in each of tis many small pods, and flowers with lovely yellow blossoms.

But it was the heartwood, and the sap, that made the trees valuable. The sap could be used to make a good-quality brown dye. The same sap, when treated with simple chemicals, could also produce purple dye. As English landowners converted their holdings from small, rented subsistence farms to larger spaces for cash crops, the business of wool production flourished, and dyes like logwood were in high demand. 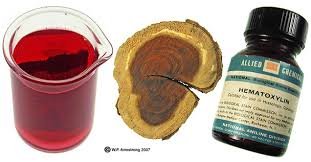 Logwood cutting began in the early 1600’s and continued into the 19th century, leaving a mark on local culture. The nation of Belize called them “Baymen” and the egalitarian lifestyle they led strongly influenced the formation of Belize’s government.

The Spanish, of course, didn’t like this. They objected to foreigners on soil that they had taken from the natives, and they were enraged by that fact that these people weren’t even Catholic. They chased the logwood cutters off whenever they found them, and sometimes pounded them with cannon fire, captured them and held them as slaves, or caught them and tried to convert them, by torture if necessary.

Despite this, camps flourished. It was a long coast, with plenty of hidden coves to beach boats on, and lot of jungle to hide in when the occasion arose. With few possessions to protect, these buccaneers had little to lose.

In addition, they were on generally good terms with the natives. The Spanish has long ago conquered the Central and South American population centers, but plenty of natives had fled into the woods. Though the buccaneers occasionally stole canoes and probably posed a danger to native women-folk, they had no interest in changing the native’s religion or chasing them off the land. 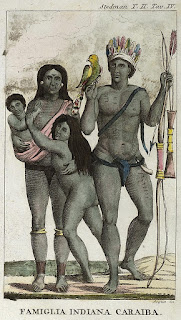 Indeed, the buccaneers were willing to trade European manufactured goods for items like food, medicine or tanned animal hides. They were one of the few groups to supply the native with guns, shot and powder (which further enraged the Spanish.) English wild men also brought mirrors, iron pots, knives and so on. Both groups kept a lookout for their enemies, and offered other kinds of support.

After life as a European peasant, logwood cutting must have seemed like paradise. The men worked when they wanted, ate and drank when they pleased, and endured no government but the opinion of their friends. All were equal. Escaped slaves, escaped bond servants, sailors who had jumped ship, all lived together on equitable terms. Of course, it was a rough life. Literate folk who encountered camps of logwood cutters came away with tales of drunkenness, constant swearing and cursing, and occasional violence. These were men who “didn’t know their place.” Or, more likely, they were aiming to carve out a new place for themselves. 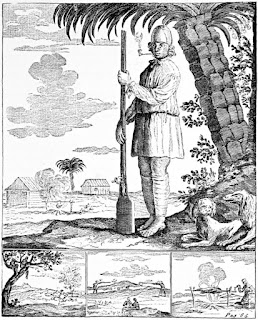 One of my favorite observations about the culture comes from an archaeological excavation of a log-cutter camp. The remains of several such camps have been examined, but this one provided something different. Literally hundreds of clay pipes, almost all broken, were scattered around the site. The archaeologist had no idea why this camp should be so well-stocked with pipes, or why they lay in broken heaps.

My own theory is simply that one of this group’s informal raids had provided them with a shipment of pipes. Clay pipes were considered disposable at the time. Pipes could be rented in taverns, but with each new user, the tip was intentionally broken off, for sanitary reasons. After a few uses, the pipe stem would be too short, and the pipe would be discarded. This group, having far more pipes than they actually needed, may have made them a single-use item. Having an abundance of anything, even clay pipes, probably made them feel rich. 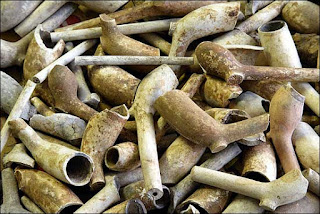 When enough logwood had been accumulated, the group would load it onto one or more boats and take it to Jamaica, where they would sell it, and load up on supplies, including vast amounts of rum.

As time went on, dyers in Europe discovered that when logwood sap, treated with copper, it produced a stable black dye, something that had not been available before. Demand grew even larger. This dye colored the formal black eveningwear of the rich, right up through Victorian times. A large-scale planter, Henry Barham, came to the Caribbean in the late 17th century and began planting logwood trees on Jamaica. Rich men made an effort to civilize the trade. 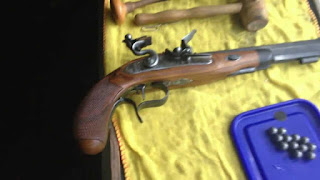 With more and more money coming from the logwood trade, by the early 1700’s the easygoing life of the buccaneers began to break down. The English government pressured the Spanish to recognize these informal English settlements, (though exactly how many settlements and what their locations were was never made clear.) By the end of Piracy’s Golden Age, slaves were doing most of the logwood cutting. Enslaved people, mostly from Africa, harvested the wood for masters who remained in town.

African families were based in settlements near their owners. The women and children worked as house servants, while the men lived in nearby camps and cut the valuable wood. Some of the men took the opportunities offered by their unsupervised work to strike out for freedom, but ties to their families kept most in line. These people were not freed until 1853.