In celebration of the end of DOMA, and hoping for the freedom to marry, for everyone, everywhere.
Sailors at sea have always been prone to what sociologists call “situational homosexuality.” All-male crews, at sea for weeks or months, cut off from the rest of humanity, turned to each other for sexual release. Pirates, most specifically the pirates active in the Caribbean beginning in the 1600’s, had formalized unions between consenting adult men.

The term used for this was matelotage a French word with the meaning of “seamanship” stemming from the word matelot which meant “seaman” or “sailor.” The French government showed concern for their sailors turning to a homosexual lifestyle, so much so that in 1645 the French governor of Tortuga requested hundreds of prostitutes be shipped to the New World to lure the sailors out of each other’s arms. 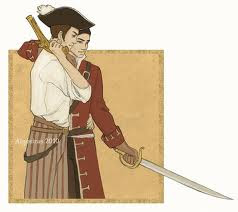 Being French, the sailors did not deprive themselves of pleasures already acquired, but shared the favors of the ladies as they shared so many things.
Sailors often moved between ships, even between ships of different nationalities. The English sailors, observing the close relationship between pairs of their French counterparts, adopted the words “matelot” and “matelotage” into English, with the approximate meaning of “buddy” and “buddy-ship.”
Eventually, the word “matelot” was shortened down to “mate.”  Yes, like pirates say. “Hello, mate!”

The result here was that in the English Navy, relationships went underground. Very often, they became forced, often between a superior and a subordinate. When English crews went on the account, becoming pirates, they looked for a way to legitimize relationships of honest affection.
Matelotage, now used as an English word, became a term for a legal marriage between two men. Some of these had begun as master-servant or senior-junior. But under the pirate flag, they could be honored and legitimized. 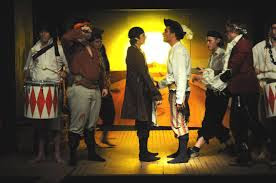 Why the extreme difference in attitudes between the English Navy and the pirates, many of whom had been navy men at one time? I think the difference lies in the fact that, in the pirate world, the law-makers and the law-abiders were in the same boat, literally and figuratively. In England, the moneyed, law making class was largely immune to the very laws they instituted. As the rich were becoming more rich through expanded trade and the growing cash economy, they enacted draconian laws to control the lower classes.

One of the peculiarities of this system was that, for a crime to be prosecuted, someone had to pay the court costs. This made it easy for a rich person to prosecute a poor one, but almost impossible for a poor person to prosecute someone better off. As long as a rich person did not “bother” a member of his own class, he was immune from the law, while a member of the lower classes who seemed to be having the “wrong kind of fun” might attract the attention of someone with more money who was willing to spend money to take him to court.

In pirate society (and only pirate society) two men could “marry.” They would exchange gold rings, and pledge eternal union. After this, they were expected to share everything.  Plunder and living spaces were obvious, but couples in matelotage were also known to share other property, and even women. If one of the partners was killed in action, pirate captains were careful to make sure that the surviving member received both shares of plunder, as well as any appropriate death benefits.

Simply put, homosexual relationships had been kept under wraps by people in fear for their lives because of draconian laws. Among sailors who had practiced this form of release themselves, it lost its sense of being alien, and so became accepted and legitimized as soon as they (by turning pirate) gained the right to make their own laws. 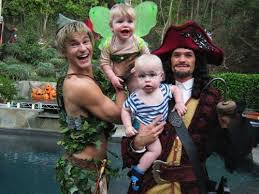 In today’s society, the recent legitimization of gay marriage in the US became possible because of the people who “came out” when it was still dangerous. Neighbors, friends and relatives saw that gay people were not so very different after all.
Posted by TS Rhodes at 8:38 PM