How did pirates spend their time?

On an “average” pirate ship, during the Golden Age of Piracy, how did the pirates spend their time? What did they do all day?

First, setting the stage, a typical pirate ship was a wooden vessel, less than 100 feet long, and no more than 25 feet wide at its widest point. It had no more than three decks, a weather deck (the top deck, open to the weather) a crew deck (next one down) and a cargo deck or orlop deck below the waterline. Some ships had a raised platform on the rear quarter of the weather deck called the quarter deck, with the ship’s wheel located on it. 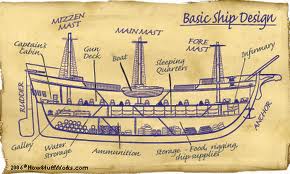 The captain’s cabin was a large partitioned room, either on the crew deck level, or under the quarterdeck and opening onto the weather deck. Officers sometimes had smaller cabins with bunks, also partitioned off from the crew deck. Common sailors had hammocks on the crew deck. Personal space was at a minimum.
Non-pirate crews were constantly busy caring for the ship and adjusting the sails for maximum speed. Navy ships kept strict discipline, and merchant ships were constantly trying to get from one port to another in the least possible time. Pirates had none of these goals.

Pirates on the move needed to work the sails, but pirates often didn’t move. A popular technique was to lie in wait along a shipping route, waiting for merchant ships to come into range. The only work that needed doing was to keep a lookout and be ready to sail. What went on in the meantime?

Many people don’t realize that pirates kept musicians on board. Usually a fiddler, these men provided music on demand. And in the days before TV, people were much less self-conscious about singing or dancing in public. Even though no women were allowed on the ship, dancing was common. Sailors had their own dances, and their own songs. Pirates, being sailors, knew these and enjoyed them.

In addition to musical entertainment, pirates had the option of drinking heavily. Liquor was a part of maritime life; even the Royal Navy issued a daily ration of it. But all recorded pirate rules state clearly that all officers and crew on a pirate ship had full use of all liquor, with no restrictions. When bored, pirates drank. And if the liquor ran out, a special effort would be made to find a ship carrying rum and rob it.

Pipe smoking was also popular at the time, and since Caribbean pirates often looted ships carrying full loads of tobacco, they had ample opportunity to indulge in this vice as well. A slow-burning fuse was often kept handy on the weather deck for use in lighting pipes. 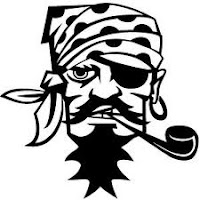 But pipe-smoking was limited by regulations. Smoking was not allowed below decks, because of the danger of fire, and anyone caught with a pipe anywhere near the powder room was liable to be whipped.
Pirates, unlike Navy personnel, owned their own weapons, and pirate rules required them to keep their swords and firearms ready for battle at all times. Because of this, it is easy to imagine groups sitting around on deck, cleaning an oiling guns and sharpening swords. There were probably impromptu marksmanship contests as well, and it’s not hard to imagine fencing lessons
.
For some real excitement, the pirates could always indulge in gunnery practice. A barrel or other target would be floated out on the water and the cannon crews would take turns trying to sink it. With the primitive equipment of the time, aiming a cannon was more of an art than a science, so practice was vital. But the competition between gun crews was exciting, the explosions were loud, and the danger was minimal.

On less exciting days, they might use extra sails to make a sunshade and sit outside mending their clothes. Literate members of the crew might teach illiterate members to read, and those who could navigate might pass on their skills. In addition, there were always chores to keep the ship operable. Sails needed to be mended, and ropes needed to be preserved with tar. Every ship needed a carpenter, and that meant woodworking to keep the decks level and the hull sound.

On a regular basis, every three months or so, the entire ship needed to be dragged out on a secluded beach so the barnacles and sea growth could be scraped off the bottom. This was a dangerous business. Ships not hiding from the authorities did this in port, so if a pirate hunter happened by, it was obvious that the beached ship was up to something illegal. The pirates could not put off careening – keeping a clean hull was important to keep a fast ship. The pirates got this work done fast and got back out to sea.

The famous pirate Bartholomew Roberts had an interesting rule: lights out at eight o’clock pm.  The rule further specified that this didn’t mean everyone had to be in bed. Those who wanted to sit up drinking simply had to do it up on the open deck.

And sitting out on the deck, under a sky full of stars, they must have told stories. Stories of the pirates of old, Avery and Morgen and Drake, stories of sea monsters, and the edge of the world, and the strange places that they had seen.

And I’m sure the topic came around, and around and around to the money, the wonderful sums of money that they did have, or they would have and all the things they would buy, grand houses and servants, fine clothes, expensive horses and the best food and liquor. And somewhere the stories still linger, out over the water, the pirate hopes and the pirate dreams, out under the tropical stars. 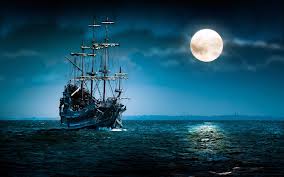